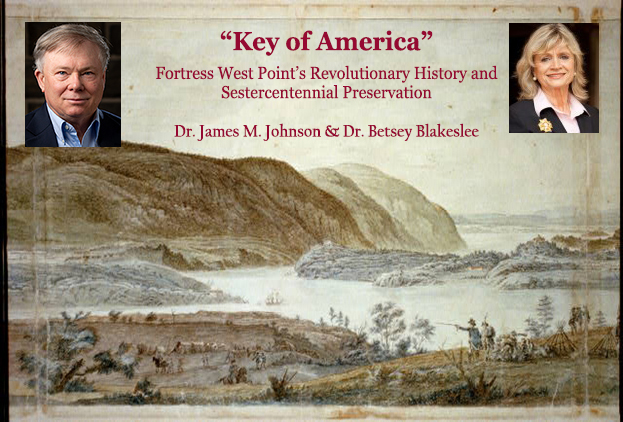 Recorded live from their webinar; watch it now at: https://www.youtube.com/watch?v=-MLU6VbfEqk

The Hudson River Valley in New York was the chief seat or theater of the war in the American War for Independence.  In “Sentiments on a Peace Establishment” in 1783, General George Washington called Fortress West Point on the across the 500 yards from West Point to Constitution Island on 30 April 1778. Weighing some 35 tons and floating on rafts of 50-foot white pine logs, the chain became the focal point of West Point’s defenses.  From 1778-1780, Colonel Kosciuszko added nine additional redoubts and four forts, including Fort Putnam, to la Radière’s plan to complete the sophisticated defenses. Facing a classic defense in depth, British General Sir Henry Clinton deemed Fortress West Point so formidable that, rather than attack it, he tried unsuccessfully to buy it from the Highland Department’s commander Major General Benedict Arnold in 1780.  General Washington continued to use Fortress West Point as his strategic anchor for the remainder of the war.

The remains of the fortifications at West Point date from 1775-1783, and number over 30 sites with 70% of these sites in serious need of stabilization and preservation. The Friends of the American Revolution at West Point, Inc., was established as a 501c3 non-profit, in partnership with West Point officials, the State of New York and the federal government to restore General Washington’s fortification system, the most expansive collection of  Revolutionary fortifications in existence in America today.  The goal is to have the fortification system complete in the next 5 years in time for the celebration of General Washington being named Commander in Chief, the establishment of the American Army, and the building of Fort Constitution, which will take place in 2025 (Sestercentennial).

Dr. James M. Johnson is the Executive Director of the Hudson River Valley Institute at Marist College and has taught history there since 2000, now serving as the Dr. Frank T. Bumpus Chair in Hudson River Valley History. Author of Militia, Rangers, and Redcoats, co-compiler of America’s First River, and the co-editor of "Key to the Northern Country”: The Hudson River Valley in the American Revolution, Dr. Johnson graduated from the United States Military Academy in 1969 and served for 30 years in the U.S. Army, retiring as a colonel.  Duke University awarded him a Master of Arts in History in 1977 and a PhD in History in 1980.  He received a second Master of Arts degree in National Security and Strategic Studies from the Naval War College in 1995.  He commanded two field artillery batteries in Germany and Korea and taught for 15 years in two tours in the Department of History at West Point.  In his second tour there, he headed the military history program, rising to the rank of Professor of History.

Dr. Betsey Blakeslee is the President of the not-for-profit Friends of the American Revolution at West Point.  She received her B.A. at Marymount College in Tarrytown, her M.A. from De Paul University, and her Ph.D. in American Studies from the University of Maryland.   She was Chair of the Mass Communications Department at Piedmont College in Georgia. She has over 25 years’ experience in the telecommunications industry.  Here are a few highlights: Appointed by the Secretary of the Army, she served as Executive Liaison for The Center For Total Access at Fort Gordon coordinating civilian and military activities at the testbed for telemedicine applications in the battlefield.  She served as an Executive Director of the National Commission on Workplace Learning and Technology under the Secretary of Labor.  From 1992-1994, she was the Director at the Institute for Telemedicine at the Center for the New West in Denver, CO. Additionally, she was President and CEO of U S West Network Systems and the Director of Executive Leadership Development at US West.   Dr. Blakeslee recently received the Gold Cross of Merit from President Komorowski of the Republic of Poland for her preservation work at West Point for both Kosciuszko’s Garden and West Point’s Revolutionary War fortifications.