At Home and Abroad Webinar

The Hudson River Valley At Home and Abroad 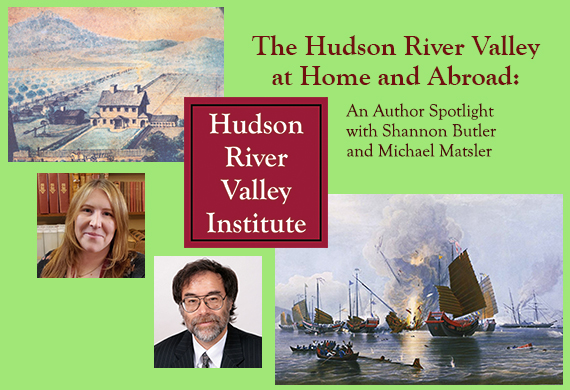 The Hudson River Valley at Home and Abroad:
An Author Spotlight with Shannon Butler and Michael Matsler
Thursday, August 13
4:00 p.m.

Local historians and Hudson River Valley Review authors discuss their research into the lives of regional residents that stretched around the world.  Learn about the sea-fairing merchants that Franklin Delano Roosevelt credited for his “vitality,” and see how one corner of Washingtonville, NY can be linked to, and throughout, Europe in the American Revolution and through both World Wars.

Shannon Butler is author of “Extracting the Truth from the Trade: The Delano Family at Home and in China,” which appeared in The Hudson River Valley Review, Volume 33, Number 1, Autumn 2016. She presents new research on the Delano family that is based on the use of documents in the archive at the Franklin Delano Roosevelt Presidential Library. The Delanos were sailors and merchants in the nineteenth century, and Ms. Butler presents their family and business activities in New York and Newburgh as well as in China and India.

Michael J. Matsler is author of “If Windows Could See: The Historic Blooming Grove Church,” in The Hudson River Valley Review, Volume 36, Number 2, Spring 2020 and “Pine Hill Farm, Lost Paradise of a French Gentleman Farmer,” Volume 34, Number 2, Spring 2018. Both articles trace the fascinating adventures of individuals connected to the Washingtonville/Blooming Grove area and their involvement in historic events of national and world-wide importance; “…if Windows Could See…” looks into one community’s history from colonial times to the modern era through the lens of an historic church’s stained glass windows, and “Pine Hill…” follows the eighteenth-century odyssey of Hector St. John de Crèvecœur, author of Letters from an American Farmer.

Shannon Butler is a Poughkeepsie native and a graduate of both SUNY New Paltz and SUNY Albany. She began her career in museums at the Senate House State Historic Site in Kingston, New York, and worked with the National Park Service at Roosevelt-Vanderbilt National Historic sites for eight years, where she found her interest in Roosevelt history. In 2018, she became the historian for the Town of Hyde Park and a year later was also made the historian of the Poughkeepsie Public Library. She is the co-author of Hyde Park in the Gilded Age, and her new book Roosevelt Homes of the Hudson Valley is being published on August 17th by the History Press.

By day, Michael J. Matsler is a partner at the local law firm of Rider, Weiner & Frankel, P.C. where he devotes his practice to human resources and employment law, construction industry law and commercial contracts, and business law and dispute resolution, among other areas. He received his undergraduate degrees in French and in German from the University of California at Berkeley and his law degree from Boston College Law School. Representative clients include regional contractors, municipalities, national developers, local private schools, businesses, and not for profit service agencies.

In his off hours, Mr. Matsler has published several magazine and newspaper articles of local historical interest and has written historical novels. He has also presented lectures at regional libraries and on radio programs. Although born in San Francisco, he has resided for over 30 years in Orange County, New York, with spouse Li, where their two sons James and Jonathan (Marist Class of 2020) were born, thus continuing in atavistic fashion a tradition started by their great-grandfather six times removed, born in Orange County in 1753 and died while serving in the 4th New York Regiment of the Continental Army in 1780. ‘Twas the ghost of old George who drew him here, to the historic Hudson River Valley and the true epicenter of the American Revolution.