How We Remember: New York’s Commemorations of the American Revolution 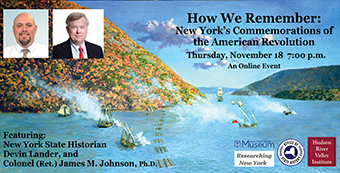 Watch it now on the Marist Alumni YouTube channel at
https://www.youtube.com/watch?v=FpAPKQFsbt0

New York State has a legacy of commemorating the American Revolution that dates back to the period of the Revolution itself.  In this conversation, major remembrances of that war are be discussed, with specific emphasis on the modern events of the 225th anniversary (2000-2009) and the upcoming 250th anniversary (2025-2033).

Thanks to our friends at Marist Alumni, we are continuing to make all of our HRVI virtual programs available "on demand" through YouTube at https://www.youtube.com/channel/UCjuN4TZm6-YFUaoR40qkJdw/videos.

This program was a presentation of the Hudson River Valley Institute, the New York Office of State History, the New York State Museum, and Researching New York.  It was an online only event that was held on Thursday, November 18, at 7:00 p.m.

Devin Lander is New York’s 16th State Historian and Head of Museum Chartering for the State Education Department.  Previous to being named State Historian, he was the Executive Director of the Museum Association of New York (MANY) and worked as Deputy Legislative and Policy Director for the Chair of the New York State Assembly’s Tourism, Arts, Parks and Sports Development and Governmental Operations Committees.  He holds a BA in History from the State University of New York at Plattsburgh and a MA in Public History from the University at Albany where he is currently completing work on his Ph.D.  Devin is also co-host of the podcast A New York Minute in History produced by WAMC-Northeast Public Radio and co-editor of the New York History journal published by Cornell University Press.  He was elected as a New York Academy of History Fellow in 2020.

Dr. James M. Johnson is the Executive Director of the Hudson River Valley Institute at Marist College and has taught history there since 2000, now serving as the Dr. Frank T. Bumpus Chair in Hudson River Valley History. Author of Militia, Rangers, and Redcoats, co-compiler of America’s First River, and the co-editor of "Key to the Northern Country”: The Hudson River Valley in the American Revolution, Dr. Johnson graduated from the United States Military Academy and served for 30 years in the U.S. Army, retiring as a colonel.  He has a Master of Arts and Ph.D. in History from Duke University and a second Master of Arts in National Security and Strategic Studies from the Naval War College.  He commanded two field artillery batteries in Germany and Korea and taught for 15 years in two tours in the Department of History at West Point.  In his second tour there, he headed the military history program, rising to the rank of Professor of History.

About the Hudson River Valley Institute:

HRVI is supported by a major grant from the National Endowment for the Humanities.  Visit HRVI on Facebook at https://www.facebook.com/hudsonrivervalleyinstitute.

About the New York Office of State History

About the New York State Museum

The New York State Museum serves the lifelong educational needs of New Yorkers and visitors through its collections, exhibitions, scholarship, programs, media and publications in science, history, anthropology, and art. The Museum explores and expresses New York State's significant natural and cultural diversity, past and present.

Researching New York is an annual conference on all aspects of New York State history presented each November by the University at Albany History Department.