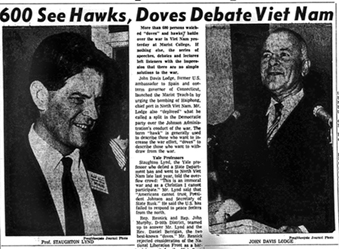 Fifty-five years ago as the nation increasingly became embroiled in what many historians consider our most divisive and controversial war, a tiny college in Poughkeepsie took center stage. A number of notable political leaders and social justice activists traveled to Marist College and took part in a debate regarding the Vietnam War. Taking the lead in the Hudson Valley, and following on the heels of what had been occurring on many of the more prestigious universities in America, the college sponsored its own Teach-in. Capturing front-page coverage in the Poughkeepsie Journal the event certainly became newsworthy as college students and residents from throughout the region poured into the campus to be part of the first and only Teach-in of such national stature to take place in the Hudson Valley, let alone Dutchess County....