The Compleat Victory: Saratoga and the American Revolution 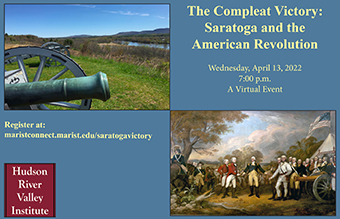 Colonel (Ret.) Kevin Weddle, Ph.D, will present research from his recently published book, The Compleat Victory: Saratoga and the American Revolution (Oxford University Press, 2021), which assesses that campaign from the tactical, operational, strategic, and leadership perspectives.

Colonel (Ret.) Kevin Weddle, Ph.D. is Professor of Military Theory and Strategy and Elihu Root Chair of Military Studies at the US Army War College. He is a graduate of the U.S. Military Academy at West Point and served over 28 years as a combat engineer officer. Throughout his career he worked in a variety of command and staff positions in the United States and overseas and is a veteran of Operations Desert Shield and Desert Storm and Operation Enduring Freedom.

Colonel Weddle holds master’s degrees in history and civil engineering from the University of Minnesota and a Ph.D. in history from Princeton University.  He is the author of Lincoln’s Tragic Admiral: The Life of Samuel Francis Du Pont (University of Virginia Press, 2005), has written numerous articles for popular and scholarly journals and appeared as an on-air expert in the 2020 History Channel documentary “Washington.”

The Charlotte Cunneen-Hackett Lecture Series was established in 2001 to advance appreciation of the rich heritage of the Hudson River Valley and to promote the history of the region.