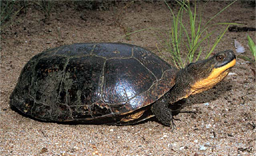 VII. Where to Find Them Locally

(Specific information is not generally given as to protect the species from harm, especially 'collection.')