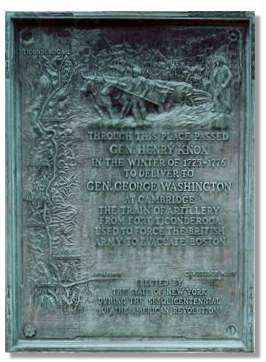 "The Advisory Board of Battlefields and Historic Sites selected a type design for markers and placed 30 of them through the advice and cooperation of the State Historian."

From the report of the New York State Conservation Department, 1928.

On September 26, 1926, during the commemoration of the hundred and fiftieth anniversary of the American Revolution, New York State Historian Alexander C. Flick reported to the Advisory Board on Battlefields and Historic Sites from "the sub-committee appointed on June 16, 1926, to investigate and report on marking the Trail over which General Henry Knox conducted the artillery train and supplies from Fort Ticonderoga to Boston in the winter of 1775-1776."

The state sought a way to interpret, for the general public, one of the most romantic episodes of the Revolutionary War, in which Henry Knox, a twenty-five year old Boston bookseller, organized and led the transport of fifty-nine captured artillery pieces, in the dead of winter, from Fort Ticonderoga to Washington's army outside Boston.

The committee first studied the primary sources, Henry Knox's diary and correspondence and the 1832 memoir of one participant who, as a twelve year old boy, had accompanied his father on the great trek. Based on these sources, the committee identified the route they believed the Knox caravan followed: the Knox Trail. Next they recommended that the trace of the route be marked at intervals, one of the earliest examples of an historic or heritage trail.

The Advisory Board on Battlefields and Historic Sites recommended that the state purchase thirty granite markers in identical pattern, each with a bronze tablet featuring a map of the trail, a heroic image in relief of cannon being dragged by ox sled through the snow, and the words:

Through this place passed General Henry Knox in the winter of 1775-1776 to deliver to General George Washington at Cambridge the Train of Artillery from Fort Ticonderoga used to force the British army to evacuate Boston. Erected by the State of New York 1927.

The markers were to be placed at intervals of a few miles from Fort Ticonderoga to the Massachusetts border where the Commonwealth would carry the trail eastward to Cambridge.

This website serves as an introduction to the Knox Trail project of 1926 and the event which it was designed to commemorate. But it is also a field guide to the Knox Trail as it exists today—a heritage trail that runs across New York State from Fort Ticonderoga to Hillsdale, and through Massachusetts from the State Line to Boston.