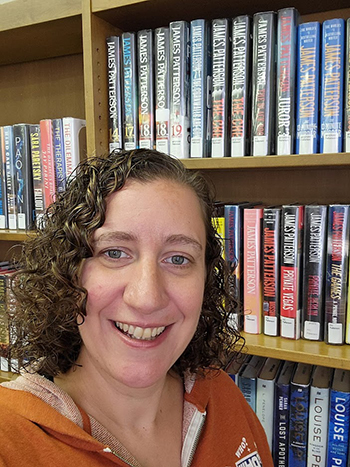 Kristin earned a Bachelors in History from Marist College and a Masters in Library and Information Science (MLIS) with a Concentration in Archives and Records Management from Long Island University, C.W. Post Campus

What has your career path been to this point?

After graduating from Marist, I became an intern at the American Bible Society (ABS) in their archives. After a few months, I started my MLIS and was hired in 2005 full time as the Archivist of ABS. In 2009, I was promoted to the Manager of the Library and Archives there. When ABS moved to Philadelphia in 2015, I entered the Public Service world as a librarian at Queens Public Library in the Laurelton Branch. In 2017, I was promoted to Assistant Community Library Manager in the same branch and am still there today.

Can you share a memory from your time at HRVI that stands out as meaningful?

I have many memories of HRVI! Participating in the first Patriots Weekend was truly memorable. As a lover of history, being able to partake in bringing that history to others was amazing. My favorite memory, however, was celebrating the founding of West Point. My friend Rita and I were photographers for HRVI and at that event, Colonel Johnson, wearing his reenacting uniform, and his men, also in uniform, decided to walk on the ice of the river! I was able to capture a wonderful shot of it, which is still used on the HRVI website.

*(HRVI staff again: see Kristin's photo below. And don't worry, they were walking along the shore of a cove on Constitution Island, Kristin just found a dramatic angle!)

How has your experience at HRVI helped you advance your education and/or professional pursuits since graduating from Marist?

Interning at HRVI secured my decision for my future! While interning, I was provided with the opportunity to work in the Marist Archives with John Ansley and I knew I found my calling. It led me to getting my MLIS and seeking a job in the Library and Archives field.

As HRVI celebrates its 20th anniversary in 2022, do you have any advice for future HRVI interns based on your time at HRVI and your experience in your professional field?

Be adventurous. If there is a project that is really calling to you, go for it. You may decide not to follow a career in history, but you may find another passion through the work. I was able to explore some of the beautiful mansions in the Hudson Valley Region and found a real love of photography all because of HRVI. Also, listen to your staff. Colonel and Chris were great mentors and gave me so many opportunities in the field that I knew what I wanted to do with my career.