Mastodon - Not a Stranger to the Hudson River Valley 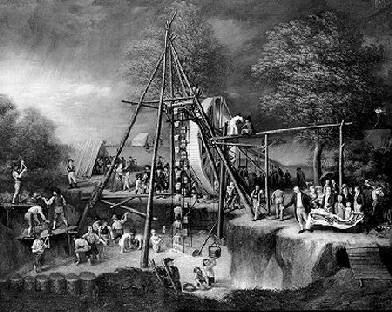 h. Not a dinosaur, though frequently confused as one

a. Orange County, NY is the source of first complete Mastodon skeleton, and the most fossils in New York have been found in this county

b. Peale and Founding Fathers

i. First mastodon in the country found in Hudson River Valley

1. Mastodon was a "Symbol of National Identity"

2. Paul Semon wrote about this, and how the founding fathers, particularly Thomas Jefferson, were very interested in this animal, and 'wanted to see it as a carnivorous beast - a symbol for the aggressive, growing nation...' in his book "American Monster"

3. Children's book of the dig "The Great Unknown"

v. Skeleton went into Peale's Philadelphia Museum, then sold to France, and now rests at Hessisches Landesmuseum in Darmstadt, Germany

i. Found in 1836 in Cohoes, (between Troy and Schenectady)

ii. Were excavating for Mill No. 3 of the Harmony Mills

iii. Replica is on display at the Cohoes Public Library

iv. Original was on moving exhibit, and has been restored

iii. One of the most complete mastodon skeletons known, still today

iv. VISIT at the American Museum of Natural History, where it has been since 1925

iii. Not much in that region and Long Island due to water-saturated soil

i. Found in 1972 on Warwick-Chester border

iv. VISIT him: housed at SUNY Orange in the Bio-tech building since 1976

v. Currently, trying to restore him because old methods of preserving trapped moisture in the bones and he is decaying

i. One of the most complete skeletons of an American Mastodon ever found

2. Featured on the Discovery Channel

ix. August 2002 - sent to University of Michigan for molding and studying

xii. VISIT him: Museum of the Earth

i. The first time mastodon and mammoth fossils found together

vii. Studied, prepared, and on display at PRI

viii. VISIT him: Museum of the Earth

iv. Photos From the Dig

i. Random molars and tusks have been recovered from the coast off the sea floor, some even found several hundred miles from the shore under hundreds of feet of water

ii. Some skeletons/fragments found mostly between Vienna and Hackettstown, NJ

b. Located in a bed of gray marl in Mannington Township, Salem County, NJ

f. One of the finest specimens of mastodon found in NJ

g. VISIT is in the Museum of Rutgers University

b. Exhumed from South of Vernon, NJ in Sussex County

g. VISIT her at the New Jersey State Museum

2. VISIT at The Bergen Museum

2. VISIT at The Bergen Museum

i. Much folklore was based upon fossils of prehistoric creatures

ii. Read some stories for yourself!