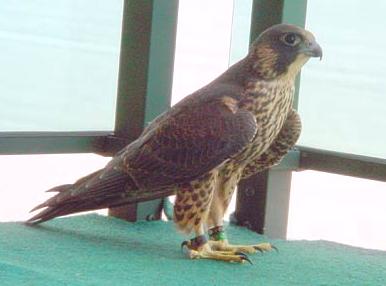 i. Dives to catch prey at speeds of 200 mph
ii. Catches prey on its wing and grabs it with its razor sharp talons
iii. If that doesn't kill it, use beak to severe spinal cord
iv. Usual prey are larger birds, such as pigeons, ducks, sparrows, starlings, and other urban birds

i. Mate for life
ii. Replace mate when it dies
iii. Female is dominant in pair
iv. Courting

a. Impresses female with flying skills
b. Kills a bird for the female
c. Mating call

a. Catches bird killed by male by flipping over
b. Accepts male

1. Male - Searches for several nests
2. Female - Chooses the nest from those shown by the male

a. "Pipp" at the egg
b. Use sharp "egg tooth" on beak
c. Eyes remain shut for several days after emerge

3. Aren't fed for 24 hours after hatching
4. Feathers are white down only for 3 or 4 weeks, then regular plumage
5. Fledglings

a. Name given when chicks leave the nest on their first flight
b. Usually between 38th and 45th day after hatching
c. Females leave last as they are larger and need more time to develop their muscles

i. Very high so they can see their prey
ii. Prior to endangerment

1. Three species that spread across North America
2. Migrate south for winter, but not if there is enough food in their breeding area 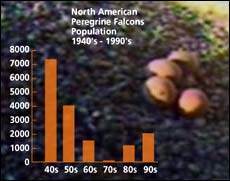 a. Use of DDT and organophosphate pesticides caused major decline in 1970's

i. Breeding pairs dropped from 350 to 39
ii. DDT and like compounds causes:

i. Hacking - raising birds in an artificial nest and caring for them until they are able to fly
ii. Peregrine Fund

1. Breeding project founded in 1970
2. Headed by Tom Cade at Cornell University
3. Another breeding facility at Ft. Collins, Colorado
4. Consolidated at The World Center for Birds of Prey in 1984

1. Professor at SUNY New Paltz
2. Fist scientist to breed Peregrine Falcons in captivity - 1971
3. Gave the breeding pair to Cornell University to carry on
4. Played a key role in the falcon being removed from the Endangered Species list
5. Named on "100 Champions of Conservation" of the 20th Century by the National Audubon Society

1. Young birds are banded and checked for health
2. Identification and tracking purpose

a. DDT still used in other countries where the birds migrate
b. DDT accumulates and may cause reproductive problems

V. Where to Find Them