of the Hudson River

b.      Sometimes referred to as white shad

d.      Scales are Green/Blue/Brown along back and silver belly; shed easily

iii.      Males (bucks) are generally smaller than females (roe - refers to both females and their valuable eggs)

a.       Anadromous - born in freshwater, but live in ocean and return to river of origin to spawn

b.      River specific in that each returns to its own river and don't change rivers

b.      Shad run aka "lilac shad" due to the time of year when lilacs are in bloom

i.      Mid-March to late-May from Kingston northward

iv.      Most vigorous spawning between sunset and midnight

3.      Fertilized eggs are carried by the current, though many roll around the bottom and are eaten by predators

5.      Transparent, but range from pale pink to amber

1.      Spend first summer in freshwater, then migrate to brine

vii.      Sexually mature - return to the same water in which they hatched via smell, though not many repeated spawners, as they generally live through only one spawning cycle once they have reached sexual maturity

b.      Most important commercial fish in the Hudson River

c.       Hudson known as one of the most productive rivers of shad in North America (New York leads in-river commercial shad fishing)

d.      "In point of commerce, the Hudson is the most important river of the United States, and formerly its shad fisheries were the most valuable on the Atlantic seaboard..." Stevenson in 1896.

e.       Shad are referenced in various historical works and even paintings from the Hudson River School (mid-1800's) 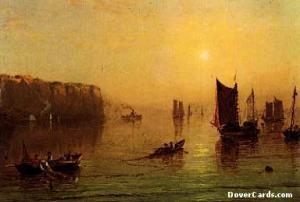 e.       Factors of Decline - greatly debated and no definitive answer(s)

vii.      Water quality and damming are agreed upon by most

i.      Solving the Current Problems - goal: self-sustaining runs of shad

1.      May work itself out - many fisherman (commercial) have given up on shad due to economic reasons

6.      Educate the public of the problem and how to fix it; work together

a.        Fishery Management Plan for American Shad and River Herring (1985) and Amendment 1 and Technical Addendum I - regulation and monitoring plan of shad and their environment

1.      Only fish not banned from commercial fishing in Hudson

a.       Don't spend enough time in Hudson for PCB's to accumulate, so safe to eat fish and roe

b.      Still, child-bearing age women and children are not to eat them

a.       Yearly celebration of Hudson River Shad (in Kingston)

a.       Shad from Hudson River were stocked in California by request

b.      Seth Green of NY was the first person to artificially hatch shad, and established the Castleton on Hudson hatchery

a.       "Reflections of a Shad Fisherman" http://www.hudsonriver.com/halfmoonpress/stories/0698lett.htm

c.       "The Silverbacks Are Running" http://www.ulster.net/~hrmm/diglib/carmer/chapter31.html